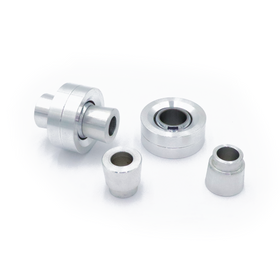 Hover over image to zoom

These Rear Lower Control Arm Knuckle Bushing replace the rubber factory bushing attaching the lower control arm to the knuckle with a low friction teflon-lined spherical bearing. Replacing the OEM component with this bushing will allow for less deflection under heavy load, and less bind as the arm travels through its suspension. We use the largest possible FK bearing in this location for increased longevity and lower NVH. The housing for the bearing is machined out of 6061-T6 aluminum and is CNC cut to +/- .001" tolerance to insure proper fitment.

Sold as a pair.

Made in the USA.

This product hasn't received any reviews yet. Be the first to review this product!

All prices are in USD